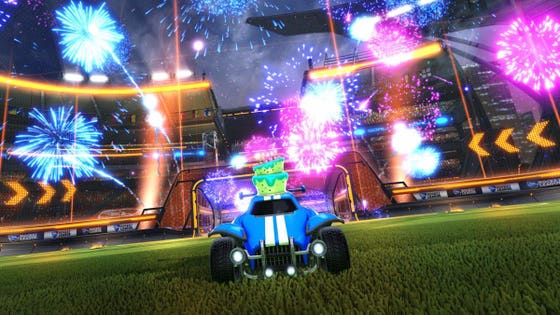 Rocket League‘s latest event ends July 23rd at 8 PM (EDT), and unlike with other events there’s no grace period for your in-game event currency. Yes, that means your balloons will pop when Rocket League‘s birthday party ends.

So, if you’ve got your eye on another event reward or two, now’s the time to grind to get the last of the balloons you need.

Unfortunately, this means that the Anniversary playlist is also ending. Though the playlist is ending, Throwback will soon be playable in Private Matches, Tournaments, and Local Matches, but I’m disappointed that the playlist is wrapping up with the event. I’m a huge fan of the Throwback map, and I even think the arena deserves a permanent playlist.

Anyways, with Rocket League‘s third birthday party winding down, let’s look ahead at what Psyonix has in store for the rest of the summer.

Cross Platform Parties are a long-requested feature that are finally making their way to Rocket League. According to the Summer Roadmap, players will soon be able to register for a unique id that will allow them to party up and play with players on any platform.

Of course Cross Platform games are already a part of the game, but there’s sadly no way to link up with your friend on a different system. Psyonix has set this deadline for this and the remaining Summer updates for July-August, meaning we might have to wait until near the end of August to play with our cross-platform friends.

Level Progression will also see quite a few big changes. Profile levels will no longer be capped at 75 and players will automatically be assigned a new level once this update takes effect. Levels will also be set at a fixed amount of XP apart, making level progression much more rewarding than the current system. According to the (unofficial) Rocket League wiki, the 10 levels between Master and Legend level tiers take about 15 times longer to progress through than the 10 levels between Semi-pro and Pro. That’s hundreds of hours of gameplay where players won’t see a change in their title, essentially wasting what could be a fun system.

The level progression system will be much more rewarding once your level is tied to the Rocket Pass. Psyonix is introducing Fortnite-style Rocket Passes that will unlock cosmetic items as players progress through the levels. Each Rocket Pass will only be available for a few months, and there will be both a free and paid version. The paid Rocket Pass will cost $9.99 (or 10 keys), giving players access to exclusive cosmetic items and will about 100 hours of gameplay to unlock everything. Players in the Rocket League trading community are especially excited for Rocket Passes, since they have no qualms about spending money on cosmetics and will soon have even more to collect. However, average players might not be as thrilled since they likely won’t want to spend $10+ on items they may or not actually get. More info on Rocket Passes can be found here.

With Rocket Pass and Cross Platform Parties on the way, the rest of the summer might be just as exciting as the events we’ve had so far.