GE reports quarterly earnings before the opening bell on Wednesday, Jan. 24 and analysts expect the company to earn 28 cents a share.

Some say that GE is now a buy on the prospect of successfully transitioning into an industrial stock. In my opinion, a trading position at my monthly value level of $15.92 can be justified given that the stock is technically oversold.

However, if GE spins off business units, the stock will likely be booted from the Dow Jones Industrial Average, which normally causes weakness, as any portfolio benchmarked to the Dow 30 must remove the stock.

Bank of America Merrill Lynch downgraded the stock citing lower earnings estimates, a lack of value for GE Capital and a $6.2 billion after-tax charge for its insurance portfolio.

I must admit that I liked shares of GE when the dividend yield was above 4%, but when the dividend was cut, and the yield fell below 3%, I would not even include the stock in my eight ‘Dogs of the Dow’ for 2018.

Most analysts who track the Dogs of the Dow’ have ten components. I have been choosing eight stocks, and each year I remove the prior year big winners. I want to have my dog pound to have an aggregate loss for the prior year, but that was illusive for 2018. My eight ended 2017 with an aggregate gain of just 1.7%.

The daily chart for GE 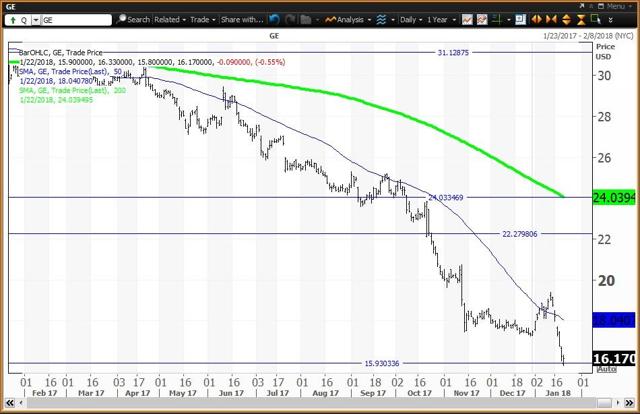 The Weekly Chart for General Electric 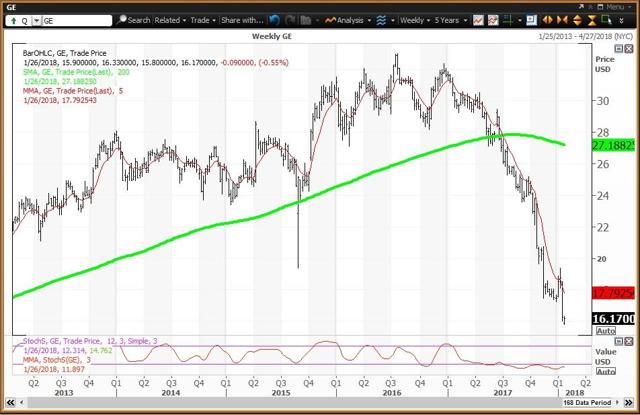 The weekly chart for General Electric is negative but oversold with the stock below its five-week modified moving average at $17.79. The stock is well below its 200-week simple moving average or ‘reversion to the mean’ at $27.19, last tested during the week of June 23 when the average was $27.77. The 12x3x3 weekly slow stochastic reading is projected to end this week at 11.90 well below the oversold threshold of 20.00.

Trading Strategy: Buy weakness to my monthly value level of $15.93, and reduce holdings on strength to my quarterly and semiannual risky levels of $22.27 and $24.03, respectively.

Disclosure: I/we have no positions in any stocks mentioned, and no plans to initiate any positions within the next 72 hours.